The Yuki-Onna (雪女, Yuki-Onna) is a snow woman ghost described as inhumanly beautiful, whose eyes can strike terror into mortals that get lost traveling in the snowy mountains. She floats across the snow, leaving no footprints.

Yuki-Onna appears on snowy nights as a tall, beautiful woman with long black hair and blue lips. Her inhumanly pale or even transparent skin makes her blend into the snowy landscape (as famously described in Lafcadio Hearn's Kwaidan: Stories and Studies of Strange Things). She sometimes wears a white kimono, but other legends describe her as nude, with only her face and hair standing out against the snow. Despite her inhuman beauty, her eyes can strike terror into mortals. She floats across the snow, leaving no footprints (in fact, some tales say she has no feet, a feature of many Japanese ghosts), and she can transform into a cloud of mist or snow if threatened.

Some legends say the Yuki-onna, being associated with winter and snowstorms, is the spirit of someone who perished in the snow. She is at the same time beautiful and serene, yet ruthless in killing unsuspecting mortals. Until the 18th century, she was almost uniformly portrayed as evil. Today, however, stories often color her as more human, emphasizing her ghost-like nature and ephemeral beauty.

In many stories, Yuki-onna appears to travelers trapped in snowstorms, and uses her icy breath to leave them as frost-coated corpses. Other legends say she leads them astray so they simply die of exposure. Other times, she manifests holding a child. When a well-intentioned soul takes the "child" from her, they are frozen in place. Parents searching for lost children are particularly susceptible to this tactic. Other legends make Yuki-onna much more aggressive. In these stories, she often invades homes, blowing in the door with a gust of wind to kill residents in their sleep (some legends require her to be invited inside first).

What Yuki-onna is after varies from tale to tale. Sometimes she is simply satisfied to see a victim die. Other times, she is more vampiric, draining her victims' blood or "life force." She occasionally takes on a succubus-like manner, preying on weak-willed men to drain or freeze them through sex or a kiss.

Like the snow and winter weather she represents, Yuki-onna has a softer side. She sometimes lets would-be victims go for various reasons. In one popular Yuki-onna legend, for example, she sets a young boy free because of his beauty and age. She makes him promise never to speak of her, but later in life, he tells the story to his wife who reveals herself to be the snow woman. She reviles him for breaking his promise, but spares him again, this time out of concern for their children (but if he dares mistreat their children, she will return with no mercy. Luckily for him, he is a loving father). In some versions, she chose not to kill him because he told her, which she did not treat as a broken promise (technically, Yuki-Onna herself is not a human, and thus did not count). In a similar legend, Yuki-onna melts away once her husband discovers her true nature. However, she departs to the afterlife afterwards the same way.

A long time ago, there lived two woodcutters, Minokichi and Mosaku. Minokichi was young and Mosaku was very old.

One winter day, they could not come back home because of a snowstorm. They found a hut in the mountain and decided to sleep there. On this particular evening, Mosaku woke up and found a beautiful lady with white clothes. She breathed on old Mosaku and he was frozen to death.

She then approached Minokichi to breathe on him, but stared at him for a while, and said, "I thought I was going to kill you, the same as that old man, but I will not, because you are young and beautiful. You must not tell anyone about this incident. If you tell anyone about me, I will kill you."

Several years later, Minokichi met a beautiful young lady, named Oyuki (yuki = "snow") and married her. She was a good wife. Minokichi and Oyuki had several children and lived happily for many years. Mysteriously, she did not age.

One night, after the children were asleep, Minokichi said to Oyuki: "Whenever I see you, I am reminded of a mysterious incident that happened to me. When I was young, I met a beautiful young lady like you. I do not know if it was a dream or if she was a Yuki-onna..."

After finishing his story, Oyuki suddenly stood up, and said "That woman you met was me! I told you that I would kill you if you ever told anyone about that incident. However, I can't kill you because of our children. Take care of our children... " Then she melted and disappeared. No one saw her again. 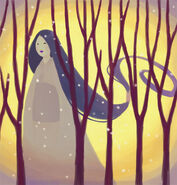 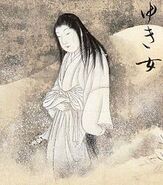