Start a Wiki
Tsurube-Otoshi (釣瓶落とし, Tsurube-Otoshi) is a creature from Japanese folklore that lurks around in the top of trees to drops down upon unsuspecting humans walking by.

Tsurube-otoshi are a gigantic disembodied heads of either a human, tengu, or oni. Sometimes they appear wreathed in flames and look like large fireballs with facial features. They live deep along paths in the forest, or just outside of town where travelers are likely to pass, spending most of their lives high in the trees (preferring pine, kaya, and other conifers for their height). They range in size from an ordinary head’s width to two meters in diameter.

Tsurube-otoshi lurk in the treetops late at night and wait for unsuspecting creatures to pass underneath. When they need to feed, they drop quickly to the ground like a stone (the reason for its name, which means “falling well bucket”). The goal is to trap an animal (a human, if the head is large enough) and eat it up. Then they slip back up into the trees, sometimes singing a monstrous taunt, challenging others to try to pass underneath. They enjoy this style of killing, letting out a horrible, guffawing laugh as they hunt and devour their prey. When they are not hungry, tsurube-otoshi will sometimes drop down and crush people just for fun instead of eating them. They also else drop large rocks or even well buckets (they have a sense of humor) on their victims from up high, laughing at the damage they inflict. Travelers passing under tall trees late at night would be wise to keep their heads up, or else they may be crushed by a falling tsurube-otoshi. 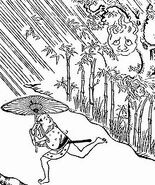 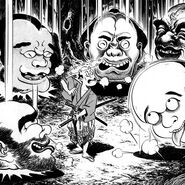 Retrieved from "https://yokai.fandom.com/wiki/Tsurube-Otoshi?oldid=9587"
Community content is available under CC-BY-SA unless otherwise noted.