Nue (鵺, Nue) is described as having the head of a monkey, the body of a raccoon dog, the legs of a tiger, and a snake as a tail. According to the legend, a nue can transform into a black cloud and fly.

Appearing in the Heike Monogatari, it has the face of a monkey, the legs of a tiger , the body of a Japanese Raccoon Dog and the front half of a snake for a tail. According to which writing it is, sometimes nothing is stated about its torso, or is sometimes depicted to have the torso of a tiger. Also, there are documents such as the Genpei Jōsuiki that state that it has the back of a tiger, the legs of a tanuki, and the tail of a fox, and furthermore the head of a cat, and the torso of a chicken. Due to its appearance, it is sometimes referred to as a Japanese chimera.

Concerning how it appears when it is depicted visually, there is also the thought that it is a combination of the animals in the sexagenary cycle, with a northeast Tiger, a southeast Snake, a southwest Monkey, and a northwest Qian (dog and wild boar).

Originally, the nue were stated to be a bird that resembles the green pheasant, but their precise identity is unknown. The 夜 within the 鵺 character is phonetic component and thus does not carry a meaning with it. The character 鵼 (kou or kuu) is determined to be a kind of strange bird. Due to the use of Man'yōgana, the historical spelling is known to have been nuye. At this early time, although, it had a different semantic meaning. It referred to a bird known as White's thrush.

In Japan, they are considered a bird that makes cries at night, and the word can be seen in the Kojiki and the Man'yōshū. The owner of this crying voice is thought to be a yellow-red bird as big as a Columbidae, but nowadays there is the accepted theory that they are scaly thrush. Since the people of the Heian Period heard the sorrowful sounding voices of this bird as some ill-omened, they were considered to be a wicked bird, and it is said that when the emperor or nobles heard its crying voice, they would make prayers that nothing disastrous would happen.

The monster in the "Heike Monogatari," in the end, was merely "something that cries with the voice of a nue, with its true nature known," and was not given a name. But nowadays, that monster's name is thought be "nue," and this one is particularly famous.

Borrowing this word for other meanings, it is also used to refer to entities of unknown true form.

According to the Heike Monogatari and the Settsu Meisyo Zue from the Settsu Province, there is the following story of nue extermination. In the closing years of the Heian period, at the place where the emperor (Emperor Konoe) lived, the Seiryō-den, there was black smoke that came along with an eerie resounding crying voice, and Emperor Nijō was quite fearful of this. Finally, the emperor fell into an illness, and neither medicine nor prayers had any effect.

A close associate finally used the precedent of Minamoto no Yoshiie using an arrow to put a stop to the mystery case of some bird's cry, and gave an order to a master of arrows, Minamoto no Yorimasa, to slay the monster. One night, Yorimasa brought along his retinue Ino Hayata (written as 猪早太 or 井早太), and taking along the arrow he received from his ancestor Minamoto no Yorimitsu, he went out to slay the monster. In doing so, some eerie black smoke started to cover the Seiryō-den, and so when Yorimasa shot a sharp arrow made from a mountain bird's tail at it, there was the sound of a shriek, and a nue fell down around the northern parts of Nijō Castle, and without a moment's delay Ino Hayata seized it and finished it off. At that time, in the skies above the imperial court, two or three voices of the cries of the common cuckoo could be heard, and it is thus said that peace has returned. From this, the emperor's health instantly recovered, and Yorimasa was given the sword, the Shishiō, as a reward.

There are several theories about what happened next concerning the exterminated nue. According to things like the "Heike Monogatari," as the people in Kyoto were fearful of the curse of the nue, they put its corpse in a boat and floated it down the Kamo River. After the boat floated down the Yodo River and temporarily drifted upon the shore of Higashinari County, Osaka, it then floated into the sea and washed up on the shore between Ashiya River and Sumiyoshi River. It is said that the people in Ashiya courteously gave its corpse a burial service, and built a mound mourning it, the Nuezuka. Concerning the Nuezuka, which was stated to have been built in order to give mmorial to the nue, is stated in the "Settsu Meisho Zue" that "the Nuezuka is between Ashiya River and Sumiyoshi River."

Also, according to the geography book from the Edo period, the "Ashiwake bune," a nue drifted down and washed ashore on the Yodo River, and when the villagers fearful of a curse thus notified the head priest of Boon-ji about it, it was courteously mourned over, buried, and had a mound built for it, but as the mound was torn down going into the Meiji period, it is said that the vengeful spirit of the nue tormented the people who lived nearby, and so in a panic the mound was rebuilt. On the other hand, according to the "Genpei Seisuiki" and the "Kandenjihitsu," the nue was said to be buried at the Kiyomizu-dera in Kyoto Prefecture, and it is said that since it was dug out in the Edo period, a curse resulted from that.

According to another theory, the spirit of the dead nue turned into a horse, was named Kinoshita and raised by Yorimasa. As this horse was a good horse, it was taken away by Taira no Munemori, and it was for this reason that Yorimasa raised an army against the Taira family, and ruined himself, and it is said that it is in this way that the nue took its revenge.

It is also said that the nue's corpse fell in western part of Lake Hamana in the Shizuoka Prefecture, and the legend of the names of places in Mikkabi of Kita-ku, Hanamatsu, such as Nueshiro, Dozaki ("torso"-zaki), Hanehira ("wing"-hira), and Ona ("tail"-na) come from the legend that the nue's head, torso, wings, and tails respectively fell in those locations.

In Kumakōgen, Kamiukena District, Ehime Prefecture, there is also the legend that the true identity of the nue is Yorimasa's mother. In the past, in the era when the Taira clan was at its peak, Yorimasa's mother lived in hiding in this place that was her home land, and at a pond called Azoga-ike within a mountains region, she prayed to the guardian dragon of the pond for her son's good fortune in battle and the revival of the Genji (Minamoto clan), and thus the mother's body turned into that of a nue due to this prayer and hatred against the Taira family, and then she flew towards Kyoto. The nue, who represented the mother, upon making the emperorr ill, thus had her own son, Yorimasa, accomplish something triumphant by being slayed by him. The nue that was pierced by Yorimasa's arrow then came back to Azoga-ike and became the guardian of the pond, but lost her life due to wounds from the arrow.

Stamp of a Nue 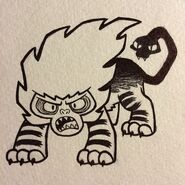 A Nue from Breath of Fire 3, with a mandrill-like face and multiple serpent-tails. 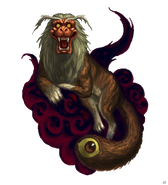 Retrieved from "https://yokai.fandom.com/wiki/Nue?oldid=9551"
Community content is available under CC-BY-SA unless otherwise noted.