Kotengu resemble large birds of prey with minor human-like characteristics. Often they wear the robes of a yamabushi – an ascetic and mystical hermit. They sometimes carry fine weapons or other items (usually stolen from human homes or temples).

Kotengu behave more like wild birds than like people. They usually live solitary lives, but occasionally work together or with other yokai to accomplish their goals. They are hoarders, and like to collect trinkets and valuable magical items, which they sometimes trade. When angered, they throw tantrums and go on destructive rampages, taking out their anger on anything near them.

Kotengu have very little respect for humans. They feast on human flesh, and commit rape, torture, and murder just for fun. They abduct people and drop them from great heights deep into the woods; or tie children to the tops of trees so all can hear their screams but none can reach them to help. They kidnap people and force them eat feces until they go mad. They especially revel in tormenting monks and nuns, robbing temples, and trying to seduce clergy.

In folklore, tengu are generally depicted as humorous creatures who are easily tricked by clever humans. There are countless folk stories about tengu being duped into trading powerful magical items or giving up valuable information in exchange for worthless trinkets. Often this happens because the foolish kotengu overestimate their own intelligence when trying to trick a human, and end up being tricked themselves. During the Edo period, most tengu lore was gradually superseded by amusing folk tales, dampening the vicious image portrayed in earlier stories. 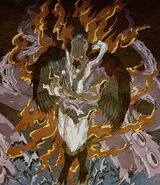 Retrieved from "https://yokai.fandom.com/wiki/Kotengu?oldid=9526"
Community content is available under CC-BY-SA unless otherwise noted.