Kitsune (狐, Kitsune) is the Japanese word for fox. Foxes are a common subject of Japanese folklore; in English, kitsune refers to them in this context. Stories depict them as intelligent beings and as possessing magical abilities that increase with their age and wisdom. According to Yōkai folklore, all foxes have the ability to shapeshift into men or women. While some folktales speak of kitsune employing this ability to trick others—as foxes in folklore often do—other stories portray them as faithful guardians, friends, lovers, and wives.

Foxes and human beings lived close together in ancient Japan; this companionship gave rise to legends about the creatures. Kitsune have become closely associated with Inari, a Shinto kami or spirit, and serves as its messengers. This role has reinforced the fox's supernatural significance. The more tails a kitsune has—they may have as many as nine—the older, wiser, and more powerful it is. Because of their potential power and influence, some people make offerings to them as a deity.

Conversely, foxes were often seen as "witch animals", especially during the superstitious Edo period (1603–1867), and were goblins who could not be trusted (similar to some badgers and cats).

Japanese fox myths had their origins in Chinese mythology. Chinese folk tales tell of fox spirits called huli jing that may have up to nine tails (Kyūbi no Kitsune in Japanese). Many of the earliest surviving stories are recorded in the Konjaku Monogatarishū, an 11th-century collection of Chinese, Indian, and Japanese narratives. The nine-tailed foxes came to be adapted as a motif from Chinese mythology to Japanese mythology.

Japanese folklorist Kiyoshi Nozaki argues that the Japanese regarded kitsune positively as early as the 4th century A.D.; the only things imported from China were the kitsune's negative attributes. He states that, according to a 16th-century book of records called the Nihon Ryakki, foxes and human beings lived close together in ancient Japan, and he contends that indigenous legends about the creatures arose as a result. Inari scholar Karen Smyers notes that the idea of the fox as a seductress and the connection of the fox myths to Buddhism were introduced into Japanese folklore through similar Chinese stories. She, however, maintains that some fox stories contain elements unique to Japan.

The full etymology is unknown. The oldest known usage of the word is in the 794 text Shin'yaku Kegonkyō Ongi Shiki. Other old sources include Nihon Ryōiki (810–824) and Wamyō Ruijushō (c. 934). These oldest sources are written in Man'yōgana which clearly identifies the historical spelling as ki1tune. Following several diachronic phonological changes, this becomes kitsune.

Kitsune are believed to possess superior intelligence, long life, and magical powers. They are a type of yōkai or spiritual entity, and the word kitsune is often translated as fox spirit. However, this does not mean that kitsune are ghosts, nor that they are fundamentally different from regular foxes. Because the word spirit is used to reflect a state of knowledge or enlightenment, all long-lived foxes gain supernatural abilities.

There are two common classifications of kitsune. The zenko (善狐, literally good foxes) are benevolent, celestial foxes associated with Inari; they are sometimes simply called Inari foxes. On the other hand, the yako (野狐, literally field foxes, also called nogitsune) tend to be mischievous or even malicious. Local traditions add further types. For example, a ninko is an invisible fox spirit that human beings can only perceive when it possesses them.

Physically, kitsune are noted for having as many as nine tails. Generally, a greater number of tails indicates an older and more powerful fox; in fact, some folktales say that a fox will only grow additional tails after it has lived 100 years. One, five, seven, and nine tails are the most common numbers in folk stories. When a kitsune gains its ninth tail, its fur becomes white or gold. These kyūbi no kitsune (九尾の狐, nine-tailed foxes) gain the ability to see and hear anything happening anywhere in the world. Other tales credit them with infinite wisdom (omniscience).

A kitsune may take on human form, an ability learned when it reaches a certain age—usually 100 years, although some tales say 50. As a common prerequisite for the transformation, the fox must place reeds, a broadleaf, or a skull over its head. Common forms assumed by kitsune include beautiful women, young girls, or elderly men. These shapes are not limited by the fox's age or gender, and a kitsune can duplicate the appearance of a specific person. Foxes are particularly renowned for impersonating beautiful women. A common belief in medieval Japan was that any woman encountered alone, especially at dusk or night, could be a fox. Kitsune-gao or fox-faced refers to human females who have a narrow face with close-set eyes, thin eyebrows, and high cheekbones. Traditionally, this facial structure is considered attractive, and some tales ascribe it to foxes in human form. Variants on the theme have the kitsune retain other foxlike traits, such as a coating of fine hair, a fox-shaped shadow, or a reflection that shows its true form.

In some stories, kitsune have difficulty hiding their tails when they take human form; looking for the tail, perhaps when the fox gets drunk or careless, is a common method of discerning the creature's true nature. A particularly devout individual may in some cases even be able to see through a fox's disguise merely by perceiving them. Kitsune may also be exposed while in human form by their fear and hatred of dogs, and some become so rattled by their presence that they revert to the form of a fox and flee.

One folk story illustrating these imperfections in the kitsune's human shape concerns Koan, a historical person credited with wisdom and magical powers of divination. According to the story, he was staying at the home of one of his devotees when he scalded his foot entering a bath because the water had been drawn too hot. Then, "in his pain, he ran out of the bathroom naked. When the people of the household saw him, they were astonished to see that Koan had fur covering much of his body, along with a fox's tail. Then Koan transformed in front of them, becoming an elderly fox and running away."

Other supernatural abilities commonly attributed to the kitsune include possession, mouths or tails that generate fire or lightning (known as kitsunebi), willful manifestation in the dreams of others. More abilities include flight, invisibility, and the creation of illusions so elaborate as to be almost indistinguishable from reality. Some tales speak of kitsune with even greater powers, able to bend time and space, drive people mad, or take fantastic shapes such as a tree of incredible height or a second moon in the sky. Other kitsune have characteristics reminiscent of vampires or succubi and feed on the life or spirit of human beings, generally through sexual contact.

Kitsunetsuki (狐憑き, 狐付き), also written kitsune-tsuki, literally means "the state of being possessed by a fox". The victim is usually a young woman, whom the fox enters beneath her fingernails or through her breasts. In some cases, the victims' facial expressions are said to change in such a way that they resemble those of a fox. Japanese tradition holds that fox possession can cause illiterate victims to temporarily gain the ability to read. Though foxes in folklore can possess a person of their own will, kitsunetsuki is often attributed to the malign intents of hereditary fox employers or tsukimono-suji.

Strange is the madness of those into whom demon foxes enter. Sometimes they run naked shouting through the streets. Sometimes they lie down and froth at the mouth, and yelp as a fox yelps. And on some part of the body of the possessed a moving lump appears under the skin, which seems to have a life of its own. Prick it with a needle, and it glides instantly to another place. By no grasp can it be so tightly compressed by a strong hand that it will not slip from under the fingers. Possessed folk are also said to speak and write languages of which they were totally ignorant prior to possession. They eat only what foxes are believed to like — tofu, aburagé, azukimeshi, etc. — and they eat a great deal, alleging that not they, but the possessing foxes, are hungry.

He goes on to note that, once freed from the possession, the victim will never again be able to eat tofu, azukimeshi, or other foods favored by foxes:

Exorcism, often performed at an Inari shrine, may induce a fox to leave its host. In the past, when such gentle measures failed or a priest was not available, victims of kitsunetsuki were beaten or badly burned in hopes of forcing the fox to leave. Entire families were ostracized by their communities after a member of the family was thought to be possessed.

In Japan, kitsunetsuki was noted as a disease as early as the Heian period and remained a common diagnosis for mental illness until the early 20th century. Possession was the explanation for the abnormal behavior displayed by the afflicted individuals. In the late 19th century, Dr. Shunichi Shimamura noted that physical diseases that caused fever were often considered kitsunetsuki. The belief has lost favor, but stories of fox possession still occur, such as allegations that members of the Aum Shinrikyo cult had been possessed.

In medicine, kitsunetsuki is a culture-bound syndrome unique to Japanese culture. Those who suffer from the condition believe they are possessed by a fox. Symptoms include cravings for rice or sweet adzuki beans, listlessness, restlessness, and aversion to eye contact. Kitsunetsuki is similar to but distinct from clinical lycanthropy. 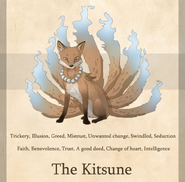 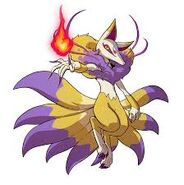