Kasha (火車, Kasha) is a cat-like spirit entity which is found near crematoriums and tries to feed off human corpses. In order to ward off the kasha, Japanese families make loud noises on bells, gongs and drums to maintain a vigil over the bodies of the departed ones. If you were a bad person during your life, once you die this yôkai will appear and take your body to hell usually in a fire carriage.

Kasha are a type of bake-neko, or monster cat. They are large, bipedal felines as large as or larger than a human. They are often accompanied by hellish flames or lightning. They like to appear during rainy or stormy weather, and most often during the night. Their name sometimes causes confusion with other yokai; while their name means “fire cart,” they do not use vehicles of any kind.

Kasha, being bake-neko, often live among humans, disguised as ordinary house cats or strays. However, they reveal their true forms during funeral services, when they leap down from rooftops to snatch corpses out of their coffins. Kasha are occasionally employed as messengers or servants of hell, in which case they are tasked with collecting the corpses of wicked humans spiriting them off to hell for punishment. Other times, they steal corpses for their own uses — either to animate as puppets or to eat.

It is nearly impossible to retrieve a person’s remains after they have been snatched by a kasha. This makes passing on to the next life difficult. The best defense is to be prepared; temples in areas where kasha are said to prowl have devised unique ways of defending against these monster cats. In Yamagata, clever priests have taken to holding two funeral ceremonies for the deceased. The first ceremony is a fake — the casket is filled only with rocks, so if a kasha comes for the body it will end up with nothing. The real ceremony takes place afterwards, when the risk of a kasha encounter is lessened. In Ehime, a head shaving razor may be placed on top of the coffin as against kasha. In Miyazaki, priests chant, “baku ni wa kuwasen” and “kasha ni wa kuwasen” (“don’t be eaten by a baku, don’t be eaten by a kasha”) twice times in front of the funeral procession in order to keeps evil spirits away. In Okayama, the priests play a myōhachi — a type of cymbal used in religious ceremonies — in order to keep the kasha away.

Kasha were once ordinary house cats. Like other animals, as they age in years and their tails grow longer, cats begin to develop magical powers. Some turn into bake-neko, more powerful cats turn into neko-mata, and beyond that some turn into kasha. Fear of such demonic cats has long existed in Japan, and since ancient times, folk wisdom tells us, “Don’t let cats near dead bodies,” and, “If a cat jumps over the coffin, the corpse inside the coffin will rise.” Fears such as these have given rise to superstitious traditions such as cutting a cat’s tail short in order to prevent it from learning magic. 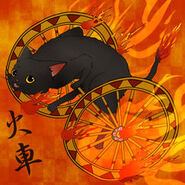 Retrieved from "https://yokai.fandom.com/wiki/Kasha?oldid=9516"
Community content is available under CC-BY-SA unless otherwise noted.