Kamaitachi (鎌鼬, Kamaitachi), is a Japanese yōkai often told about in the Kōshin'etsu region, or can also refer to the strange events that this creature causes.

They appear riding on dust devils, and they cut people using the nails on both their hands that are like sickles. One would receive a sharp wound from it, but there is no pain.

They are seen to be the same as the kyūki (窮奇) of China, and kamaitachi are also sometimes written as 窮奇.

It was originally thought to be a corruption of the word "kamae tachi" (stance sword), but like the kyūki in the "Yin" part of Toriyama Sekien's Gazu Hyakki Yagyō, they were thus re-used and depicted as a weasel yōkai, eventually becoming established as the yōkai it is now. In the "Mimibukuro" by Negishi Shizumori as well, children in the estate called Kagaya in Edo were enveloped by a whirlwind, and on the surface of their backs, there remained the footsteps of a beast, and it was written that this was the proof of a "kamae tachi" (構太刀). As a beast with fur like that of a hedgehog and a cry like that of a dog, and one that flies through the air with wings, they are said to attack people with limbs like that of a sickle or razor.

Kamaitachi are most commonly depicted as working as a trio of siblings. They attack their prey, one after the other. The First rides upon a whirlwind, striking down the prey and disorientating it. The Second attacks with its claws, cutting deep wounds in the prey. The Third then cleans the wound by licking up the blood (In some stories it applies healing ointment). After the attack, the prey is left with clean, yet painful wounds, a great sense of confusion and fear from having no idea what just happened and lacking any food they may have been carrying on their person.

Devilish winds that would cut people are told about in the Chūbu, Kinki, and other regions. There are many legends passed down in snowy regions, and there are some regions that call whirlwinds themselves "kamaitachi." On occasions of cold wind and other times, they are also a strange event of where one would fall over and get an injury on the legs.

In the Shin'etsu region, a kamaitachi is said to be the work of an evil god, and there is a folk belief that one would encounter calamity by stepping on a calendar. It is counted among one of the seven mysteries of Echigo.

In the Tōhoku region, when one receives an injury from a kamaitachi, it is said that by burning an old calendar black, and putting it upon the wound opening, it would heal.

In Hida, in the Niu River basin, they are said in legends to be a company of 3 evil gods, and the first god would knock down the person, the next god would cut with a blade, and the third god would put some medicine on it which is why it has such particular characters as the fact that there no bleeding, or no pain. There are also regions that think of these three gods as parent and child, and brother weasels.

In the Yoshio District area of the Nara Prefecture, it is said that when one gets bit by a kamaitachi invisible to the human eye, one would tumble over, even though no blood comes out, there is a big opening in the flesh.

In the eastern part of the Aichi Prefecture, they are also called idzuna (飯綱), and it is said that since an idzuna-user once forgot to tell his disciple about how to seal an idzuna, the runaway idzuna would ride on whirlwinds and attack people in order to suck their living blood. It is said that the reason why no blood comes from the wounds from a kamaitachi is because the blood is being sucked away.

In the mountainous regions of Kōchi Prefecture and Tokushima Prefecture among other areas of West Japan, encountering sucha strange event is called "being cut by a nogama (野鎌, "wild sickle")," and they are said to be the deeds of grass-cutting sickles that have been left and forgotten on fields and have ended up turning into yōkai, and they are also said to be a sickle's vengeful spirit (onryō) that has turned it into a tsukumogami (a receptacle that has turned into yōkai). In the Iya region, Tokushima Prefecture, it is said that sickles and hoes used for digging the hole in a funeral, if left for 7 days without taking it back, would turn into a nogama, and when one encounters a nogama, it is said that one should chant, "beneath the feet on the bottom-left of Buddha, is the stump of a kurotake [a specie of bamboo], and quickly became clean, but let it grow back (hotoke no hidari no shita no omiashi no shita no, kurotake no kirikabu nari, itau wa nakare, hayaku routa ga, haekisaru)."

In East Japan, they are also said to be the work of a mantis or longhorn beetle's ghost. In the town of Katakai, Santō District, Niigata Prefecture, in a place called "Kamakiri-zaka" (鎌切坂 or 蟷螂坂), after a giant mantis that once lived there was crushed to death by heavy snow, it is said that when one falls over on the hill, because of the mantis' curse, one would receive a would as if one was cut by a sickle, result in one suffering from black blood flowing out.

In the western parts of Japan, kamaitachi are called "kazakama" (風鎌, "wind sickle"), and said to slice off people's skins, and there is no pain the instants after it is scraped off, but after a while a hard to bear pain and bleeding would start to occur, and it is said that one could protect against this by obtaining an old calendar in one's hand.

Also, there are tales of experiences with these not only in the outdoors but also indoors, and in Edo, there are tales of women who attempted to do their business in a bathroom in Yotsuya and men who attempted put on a geta in Ushigome who encountered kamaitachi. In Ōme, there is a story where a certain woman had her lover stolen by another woman, and gathering up her resentment, when she cut her own hair, that hair became a kamaitachi, and cut off her rival in love's head by the neck with a single stroke. In this way, the legends of the kamaitachi in these various area are the same phenomena, but what their true identity is thought to be is not uniform.

In the Edo period, in the essay "Sōzan Chomon Kishū (想山著聞奇集)" by Miyoshi Shōzan, a feudal warrior of Owari, it is said that the wounds from a kamaitachi does not result in pain or bleeding at first, but afterwards an intense pain and great amounts of bleeding results, so much that sometimes even the bones can be seen from the wound opening, and even a danger of death. Since these wounds are often received on the lower part of the body, it also states that a kamaitachi cannot jump higher than about 1 shaku (about 30 centimeters). Also according to Miyoshi Shōzan, as kamaitachi live in puddles after rain, it is said that there are those who played in puddles and those who cross rivers who encountered kamaitachi.

In the Hokuriku region, according to the collection of fantastic stories, the Hokuetsu Kidan, a kamaitachi is a wound resulting from touching the blade of a dreadful god.

According to the Kokon Hyaku Monogatari Hyōban from the Edo period, there is the statement "the people of the capital, or people of the name of a samurai, encounter this calamity and pass away (都がたの人または名字なる侍にはこの災ひなく候)." If one encounters a kamaitachi, since there are medics who are familiar with this, they would rub some medicine on it healing it, so one would never die from it. In the northern parts of the country, it is cold in the shadows, weakening things. As it is cold in the northern parts of the country, cold wind blasts gather around, and the air is intensely cold. Borrowing this, they are said to be the deed of chimi in mountains and valleys. It is said that the reason why people don't receive this wound in the capital is because of the principle that malice does not win against true spirit.

Also, they are of a somewhat different nature, but there are also things called "taiba-kaze" (堤馬風). There are also regions where there are legends where devilish winds would inflict fatal wounds on humans.

In the Toyoura District, Yamaguchi Prefecture, called "yama misaki," as it is a strange phenomenon that appears deep in the mountains, there is a demonic wind taking on the shape of a human's severed head and flying above fallen lives like a wheel. It is said that humans who encounter this wind would get a big fever, and in Ainoshima, Hagi, its true identity is said to be ghosts that have no place to go after death, and have become wind that wanders around. In the village of Rokutō, Abu District, Yamaguchi Prefecture, it is said that people who died due to cliffs or shipwrecks would, after 8 days after death, become yama-misaki. In the village of Kōchi, Hata District, Kōchi (Now Shimanto), this yama-misaki is called "ryōge," and they are considered to be the spirits of those who died through unforeseen accidents, and happening upon one of these is called "ryōge-tsuki" (being possessed by a ryōge).

In Amami Ōshima, it is said that near the time of Obon, at cemetery roads and other such place, a lukewarm wind would graze by and give one a chill, and when one returns home and tries taking off one's clothing, there would be some kind of speckle on some part of the body. Before long, a high fever comes about, and one would need to need to go to a yuta (a shaman of Okinawa, Kagoshima, or the Amami Islands) to have it exorcized.

In the village of Kuroiwa, Takaoka District, Kōchi Prefecture) (now Ochi), a devilish wind resembling the aforementioned nogama is called "muchi" (鞭, "whip"), but this is said to be a wind that blows on top of a field as if a whip was flung around, and it is said that when one is struck by it, one would fall ill. In Toyosama, Tosa District (now Kōchi city), muchi are said to kill horses and cattle that take along people who travel on roads at night, and it is said that one protects against this by covering the eyes of the horses and cattle.

In Modern day Japan, the Kamaitachi, along with most other Traditional Yokai, has lost a large part of its cultural influence. This is due to attacks becoming less common and the improved methods for identify those that do happen. However, its concept of a lightning fast weasel with razor sharps claws has lead it to becoming popular with manga and anime artists, causing it to appear often within such mediums. 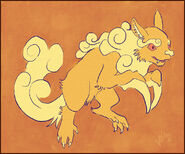 Retrieved from "https://yokai.fandom.com/wiki/Kamaitachi?oldid=9500"
Community content is available under CC-BY-SA unless otherwise noted.