The Jubokko (樹木子, Jubokko) is a yokai tree that appears in many books related to Japanese yokai, including Shigeru Mizuki's works.

On the fields of war and sites of vicious massacres, where the blood of thousands of warriors has saturated the soil, a strange kind of tree can be found. From afar, jubokko appear to be ordinary trees, indistinguishable from the various species that dot the landscape. Outwardly, they look just like ordinary trees. It takes an observant eye to notice the slightly more fearsome features of its branches, or the piles of human bones buried in the undergrowth beneath the tree. In fact, they were once normal trees, but the vast amounts of the human blood absorbed through their roots causes them to transform into yokai. Thereafter the tree thirsts only for human blood.

Jubokko wait for unsuspecting humans to pass underneath their branches. When somebody gets close enough, they attack, snatching their prey up with long, jagged, finger-like branches, and hoisting it up into their boughs. These branches pierce the skin of their victims, sucking out all of the blood with special tube-like twigs. After the body is drained of everything the jubokko can take, the rest is consumed by birds, insects, and other animals, until only the dry bones fall back to earth. By the time most people are close enough to notice the heaps of bleached bones at the base of the tree, it is already too late to escape.

Folklore scholars such as Kunio Yanagita and Iwao Hino, who wrote works such as "Yokai Stories" and "Vocabulary of Changes in Japanese Yokai", respectively, state in written works about folklore yokai that there is no yokai that became the origin of the Jubokko. A group of experts from a group called To Scholar Conference (と学会), which Youkai scholars Natsuhiko Kyogoku and Tada Natsumi, writer Murakami Kenji, and SF writer Yamamoto Hiroshi run as presidents, stated that there is no source of appearance for this yokai tree and that it can be theorized that this youkai is a fictional creature of Mizuki. Mizuki stated that he has created around 30 different youkai in his comic book GeGeGe no Kitaro, but he did not specify which among the youkai he created in his work are fictional.

It could, however, be a fictional amalgam of kodama, onryo, kyonshi, obake, tsukumogami, and (perhaps, to a lesser extent) kosenjobi and/or furutsubaki-no-rei. 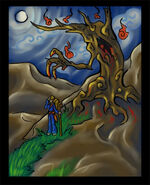 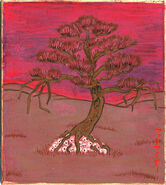 Retrieved from "https://yokai.fandom.com/wiki/Jubokko?oldid=9497"
Community content is available under CC-BY-SA unless otherwise noted.