The Ittan-Momen (一反木綿, Ittan-Momen) is the tsukumogami form of a possessed roll of cotton, that flies through the night often attacking people and trying to smother them by wrapping itself around their faces or mouths. Most has been handed down to the Kagoshima Osumi district.

Ittan-momen is a long, narrow sheet of cloth normally used to make clothes, but reanimated with the spirit of a tsukumogami. They are native to Kagoshima, and can be seen flying through the sky at night, occasionally attacking people.

Ittan-momen attack by wrapping their bodies around a person’s face and neck, strangling or smothering them to death. As far as tsukumogami go, they are fairly malicious and often dangerous or deadly instead of simply mischievous. 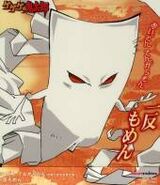 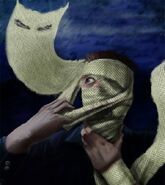