Hinoenma are wicked female yōkai which look like beautiful women. They use their beauty to attract young men and destroy them.

Hinoenma are paragons of feminine evil and the femme fatales of the yōkai world. They roam cities and streets looking for men (especially young monks) to make into their victims.

Men who become enchanted by a hinoenma are quickly ruined. The hinoenma feeds on their virility and their lifeblood, causing them to become weaker and poorer. In the end, the man dies, and the hinoenma moves on to find another victim.

Hinoenma is a Buddhist term warning about the dangers of beautiful women. Sex with women was viewed as a sin for priests because it was a worldly, carnal pleasure which distracted them from the path of spirituality. Phrases like “bodhisattva on the outside, yasha on the inside” were meant to remind monks that no matter how pleasing a woman looked, her true nature was as dangerous as a demon. This misogyny had multiple implications. Women were considered dangerous both to worldly status and wealth, as well as to spiritual health and religious pursuits. Women eat men’s food, spend men’s money, and drive men into financial and social ruin. On top of that, they force men to focus on worldly things such as sexual desires and material wealth (in order to maintain the extravagant lifestyles women demand), providing barriers to spiritual enlightenment. In other words, if you give a woman your heart, she will steal your soul.

The name hinoenma itself carries multiple interpretations. Literally translated, the name means “flying fate demon,” Fate in this case refers to the Buddhist concept of nidana, the cause-and-effect chain and birth-death cycle which links all things in the universe. Fate demon means a creature from Buddhist cosmology who tries to disrupt a person’s spiritual progression. Specifically it refers to Mara, the demon king who tried to disrupt the Buddha’s quest for enlightenment by tempting him with beautiful women.

Written with different characters, hinoenma can mean “fiery Enma,” referring to the king of hell—a hint at what awaits monks who allow themselves to be tempted by women. The name also evokes the phrase hinoe uma—the year of the fire horse—which occurs every 60 years according to the Chinese calendar. Women born in these years were said to be destined to ruin their husbands—a superstition which stems from the legend of Yaoya Oshichi. 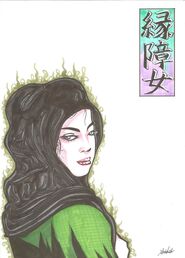 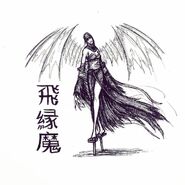 Retrieved from "https://yokai.fandom.com/wiki/Hinoenma?oldid=9850"
Community content is available under CC-BY-SA unless otherwise noted.