The hash'i from Hashihime means 'bridge', while hime means 'princess', therefore her name meaning "bridge princess". However, the word airashi (pretty, adorable) can also be said hashi, so her name has the second meaning of "charming princess".

Hashihime are intensely jealous goddesses who inhabit bridges — in particular, very old and very long bridges. As goddesses, hashihime may take different forms depending on occasion, however they are commonly depicted wearing white robes, white face-paint, an iron trivet, and carrying five candles. This is a ceremonial outfit used to perform curses.

Hashihime ferociously guard the bridges they inhabit. As with most gods connected to a location, they are very competitive and jealous. If one praises or speaks positively about another bridge while on top of a hashihime’s bridge, or if one recites lines from certain Noh plays that feature a woman’s wrath as the main theme, something terrible is likely to happen to that person.

Despite their fearsome nature, they are highly honored by the people who live nearby, and shrines are established in their honor near the bridges they inhabit. In times of war, residents will beseech their local hashihime to guard the bridge against invaders. In times of peace, hashihime are goddess of separation and severing, and are asked to aid people in things such as break-ups, divorce, and severing bad luck. So strong is their power of severing that it is considered taboo for lovers to pass in front of a hashihime shrine together, or for wedding processions to pass in front of one. If newlyweds need to cross a bridge inhabited by a hashihime, they will instead pass underneath it on a boat rather than risk cursing their marriage.

The most famous hashihime story comes from Tsurugi no Maki, in The Tale of the Heike, and is retold in the noh play Kanawa.

A woman visited the the Kifune-jinja in Kyoto at the hour of the ox (roughly 2 am), filled with rage and jealousy towards her ex-husband who had thrown her away for another woman. Night after night she visited the shrine, praying to the gods enshrined there to turn her into a powerful demon. The woman wanted nothing else other than to see her ex-husband destroyed, even at the cost of her own life. After seven nights of pilgrimage, her prayers were answered: the gods told her that if she immersed herself in the Uji river for twenty-one nights, she would become a living demon.

The woman did as she was bid. She donned a white robe and tied her hair up into five horns. She painted her face and covered her body in crimson dye. She placed an upturned trivet on her head and attached torches to each foot. She lit a torch on both ends and placed it in her mouth. She immersed herself in the Uji river and for twenty-one days she kindled the hatred in her heart. Then, just as the gods told her, after twenty-one days she transformed into a terrible kijo with supreme power. She had become the hashihime of Uji.

That night, her husband awoke from a horrible dream with a premonition of danger. He quickly sought out the famous onmyōji, Abe-no-Seimei. Seimei recognized the dream as a sign that the man’s former wife would come and destroy the couple that very night, and promised to save them. He went to their house, recited magical prayers, and crafted two katashiro — magical paper doll representations of the man and his wife, meant to be used as substitutionary targets for the kijo’s rage. That night, as Seimei had predicted, the demon appeared. She attacked the two katashiro instead of the real couple, and Seimei’s magic worked: her power was reflected back upon her and she was driven away. The demon woman, realizing that she could not overcome Abe-no-Seimei’s magic, vanished, threatening that she would come back another time. 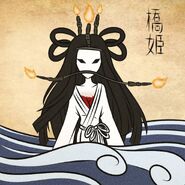