The strong boy was invited to the imperial court to display his strength. Impressed, the court decided this boy's strength was too great a gift to be left for a mere farmer. Upon the advice of Sogano Umako (apparently a famous advisor to the court) he was made a ward of Gagoze Temple.

This temple had a mysterious yōkai present. Many wards who had stayed awake looking after the temple bell, when they should have surely should have been quietly at home otherwise, had been killed. The strong boy thought that if he could end the mysterious presence of yōkai, thing might be better; so he waited by the temple bell. The mysterious presence of yōkai soon became noticeable. When he saw it, the strong boy grabbed it by its long hair and held it. In a panic, the yōkai tried to run away, but the strong boy kept his grip. The hair of the yōkai and the skin attaching the hair to its scalp were ripped away. 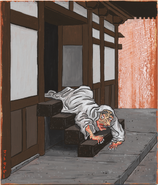 Retrieved from "https://yokai.fandom.com/wiki/Gagoze?oldid=9462"
Community content is available under CC-BY-SA unless otherwise noted.