Dorotabō (泥田坊, Dorotabō) is a mud spirit that emerges from rice paddies' murky mud and while not completely dangerous, his appearance of aged, bald and apparently blind in one eye, it frightened people.

Dorotabō are the transformed ghosts of old men who toiled so hard on their rice fields, only to see them lie in waste by a neglectful owner after their death. They appears as one-eyed, three-fingered humanoid figures rising out of the mud at night. It is said that the five fingers of the human hand represent three vices and two virtues: anger, greed, ignorance, wisdom, and compassion. The ghostly dorotabō appears with only the three fingers representing the vices, because he is a spirit of vengeance and rage, angry at the vices which now shame his life’s work.

Dorotabō roam the overgrown fields, calling out in a mournful voice, “Give me back my rice field!” They haunt their fields night after night, preventing sleep and otherwise causing feelings of unease to the new inhabitants of their lands. They continue haunting until the wasteful owners changes their ways or give up and flee, selling the field to someone who will take proper care of it.

Most of Japan’s land is bound up in inhospitable mountain ranges where farming is impossible, so the land that is usable by humans is extremely valuable. Families can save for a life time just to buy a small plot of precious farmland in hopes to leave it to their offspring after they die. Of course, children do not always follow their parents’ wishes, and a prodigal son who forsakes his father’s hard-earned fields in favor of vices like gambling and drinking is usually the cause of this eerie specter. 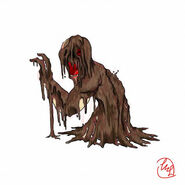 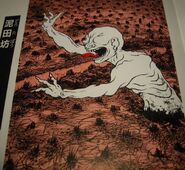 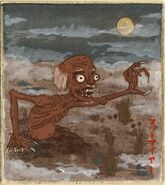 Retrieved from "https://yokai.fandom.com/wiki/Dorotabō?oldid=9445"
Community content is available under CC-BY-SA unless otherwise noted.