Chimi (魑魅, Chimi) is a yōkai with bestial bodies and human-like heads who would attack and eat humans.

Chimi is a general term for the monsters that live in the mountains, forests, swamps, stones, and other parts of nature. They have human-like faces and bestial bodies. They feed on the bodies of the dead — particularly the innards — and sometimes bring disease and other evil things with them wherever they go.

Chimi tend to be nasty, or at least mischievous, when it comes to humans. They trick humans who are wandering in the mountains, and cause them to lose their ways. Once isolated in this way, chimi can attack, often killing their victims.

The name chimi is derived from the ancient Chinese history known as The Records of the Grand Historian: Chi is the name of a tiger-like mountain god, while Mi is a swamp god with the head of a boar and the body of a human. Over time, the names of these gods combined and became a term for all kinds of monstrously shaped nature spirits. In Japan, chimi are considered to be a kind of mountain kami. 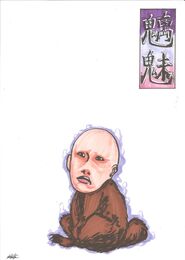 Chimi by Shotakotake
Add a photo to this gallery

Retrieved from "https://yokai.fandom.com/wiki/Chimi?oldid=9421"
Community content is available under CC-BY-SA unless otherwise noted.