Bakeneko (化け猫, Bakeneko) is a type of Japanese yōkai, or supernatural creature. According to its name, it is a cat that has changed into a yōkai. It is often confused with the nekomata, another cat-like yōkai, and the distinction between the two can often be quite ambiguous.

The reason that cats are seen as yōkai in Japanese mythology is attributed to many of the characteristics that they possess: for example, the way the irises of their eyes change shape depending on the time of day, the way their fur seems to cause sparks due to static electricity when they are petted (especially in winter), the way they sometimes lick blood, the way they can walk without making a sound, their wild nature that remains despite the gentleness they can show at times, the way they are difficult to control (unlike dogs), the sharpness of their claws and teeth, their nocturnal habits, and their speed and agility.

There are many yōkai animals other than cats in old tales that have similar attributes: the deep tenacity of snakes, the ability of foxes (kitsune) to shapeshift into women, and the brutality of tanuki in eating humans depicted in the Kachi-kachi Yama folktale from the Edo period. Cats in particular, however, have acquired a great number of tales and superstitions surrounding them, due to the unique position they occupy between nature and civilization. As cities and towns were established and humans began living farther apart from nature, cats came with them. Since cats live close to humans yet retain their wild essence and air of mystery, stories grew up around them, and gradually the image of the bakeneko was formed.

One folk belief concerning the bakeneko is that they would lick the oil of oriental lamps, and in the Edo period encyclopedia, the Wakan Sansai Zue, it is said that for a cat to lick this oil is an omen of some strange event about to occur. People in the early modern period used cheap oils from fish, like sardine oil, in the lamps, and that could explain why cats would want to lick them. Also, the diet of Japanese people at that time was based mainly on grains and vegetables, and the leftovers would be fed to the cats. However, since cats are carnivores, such a diet would have been lacking in protein and fat, and therefore they would have been even more attracted to the oil in the lamps. Furthermore, the sight of a cat standing up its hind legs to reach the lamp, with its face lit up and eyes round with anticipation, could have seemed eerie and unnatural, like a yōkai.

The mysterious air that cats possess was associated with the image of prostitutes who worked in the Edo period red-light districts. This was the origin of a popular character in kusazōshi (among other publications), the bakeneko yūjo.

As with the nekomata, another cat-like yōkai which is said to derive from a cat whose tail split into two when it grew older, there are folk beliefs across Japan about how aged cats would turn into bakeneko. There are tales of cats raised for twelve years in Ibaraki Prefecture and Nagano Prefecture, and for thirteen years in Kunigami District, Okinawa Prefecture, that became bakeneko. In Yamagata District, Hiroshima Prefecture, it is said that a cat raised for seven years or longer would kill the one that raised it. There are also many regions where when people began raising a cat, they would decide in advance for how many years they would raise it because of this superstition. Also, depending on the area, there are stories in which cats that were killed by humans in a brutal manner would become bakeneko and curse that human. The stories of bakeneko are not only about aged cats, but are also sometimes stories of revenge against cruel humans.

The abilities attributed to the bakeneko are various, but include shapeshifting into humans, wearing a towel or napkin on the head and dancing, speaking human words, cursing humans, manipulating dead people, possessing humans, and lurking in the mountains and taking wolves along with them to attack travelers. As an unusual example, on Aji island, Oshika District, Miyagi Prefecture and in the Oki Islands, Shimane Prefecture, there is a story of a cat that shapeshifted into a human and wanted to engage in sumo.

However, concerning the legend that cats could speak, it has been pointed out that it may have arisen because humans would misinterpret the cat's meowing as human language, and for this reason some would say that the cat is not a type of yōkai. In 1992 (Heisei 4), in the Yomiuri newspaper, there was an article that argued that when people thought they had heard a cat speak, upon listening a second time, they realized that it was simply the cat's meowing and that it was only coincidence that it resembled a word in human language.

Folk beliefs that cats can cause strange phenomena are not limited to Japan. For example, in Jinhua, Zhejiang, in China, it is said that a cat, after having been raised for three years by humans, would then start bewitching them. Because it is said that cats with white tails are especially good at this, there arose the custom of refraining from raising white cats. Since it is said that their ability to bewitch humans comes from taking in the spiritual energy of the moon, it is said that when a cat looks up at the moon, whether its tail has been cut or not, it should be killed on the spot. 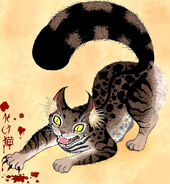 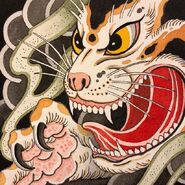 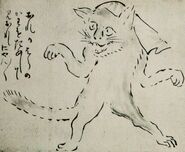 Retrieved from "https://yokai.fandom.com/wiki/Bakeneko?oldid=9353"
Community content is available under CC-BY-SA unless otherwise noted.