Azukiarai (小豆洗い, Azukiarai), or Azukitogi (小豆とぎ), is a yokai that takes the appearance of a short, grotesque-looking bald man, complete with bulging eyes and crooked teeth. Some also say it takes the appearance of a child, or elderly woman. But he doesn’t usually allow himself to be seen, or rather, isn’t seen very often. Azuki-arai resides near the banks of mountainous streams and ponds all throughout Japan, crouching over a barrel of azuki beans.

Azuki arai is a mysterious yokai encountered in mountainous regions all across Japan. It has many regional nicknames, another common one being azuki togi. This yokai lives deep in forests and mountains and spends its time near streams. Few actual sightings have been recorded, but it is said to be a short and squat, with big, round eyes, and overall resembling a Buddhist priest. It appears full of mirth with a silly smile and large hands with only three fingers. Azukiarai is sometimes blamed on a raccoon dog or weasel.

Azuki arai are more often heard than seen. Their main activity seems to be washing red azuki beans by the riverside, singing a dreadful song interspersed with the “shoki shoki” sound of beans being washed in a basket: "Azuki araou ka? Hito totte kuou ka? Shoki, shoki ("Shall I wash my red beans, or shall I catch a human to eat? Shoki, shoki"). Passersby who hear azuki arai singing usually slip and fall into the river, the noise from the splash scaring the yokai away. Nearly all encounters with azuki arai are purely auditory; they are notoriously shy, and do all they can to avoid being seen. Their uncanny ability to mimic the sounds of nature and animals also help them to hide. Because of their elusiveness, spotting an azuki arai is supposed to bring good luck. 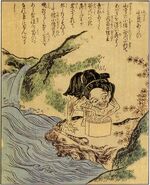 Retrieved from "https://yokai.fandom.com/wiki/Azukiarai?oldid=9403"
Community content is available under CC-BY-SA unless otherwise noted.