The akaname (垢嘗, Akaname) is a yōkai from Japanese folklore. Meaning filth licker in Japanese, akaname can also be translated to mean red licker since aka is an homonym for red and filth. For this reason the akaname is often described as being red in colour.

The akaname is the “personification of the fear of using a dark bathroom late at night.” It is said to come out at night to literally lick up the grime and dirt that accumulates in unclean bathrooms.

Akaname is a small, goblin-like yokai which inhabits only the dirtiest homes and public baths. It is about the size of a child or a small adult, though it generally appears much smaller due to its hunching posture. It has a mop of greasy, slimy hair on top of its head. Its body is naked, its skin greasy like its hair. Akaname come in many colors and varieties, ranging from a dark mottled green reminiscent of mold, to the ruddy pink color of bedsores. They come in both one-eyed and two-eyed varieties, and can have anywhere from one to five fingers and toes. All akaname have an extremely long, sticky tongue with which they lap up the slime, grease, hair, and other filth found in bath houses and behind toilets.

Like cockroaches, rats, lice, and other pests, akaname detest clean, well-kept homes, and only appear where the owners show a complete lack of sanitary discipline. They are shy and stay clear of humans, scattering in the light like cockroaches. They can spread disease, however, so it is a good idea to keep bathrooms and houses clean enough that akaname do not wish to settle down.

Toriyama Sekien's 1776 work, Gazu Hyakki Yagyō (Pictures of Demons’ Nocturnal Stroll) includes an early line drawing of an akaname, possibly based on Kokon Hyaku Monogatari Hyōban (古今百物語評判)(An Evaluation of One Hundred Strange and Weird Tales of Past and Present), a tale from the Edo period. Sekien included no explanation for the drawing. 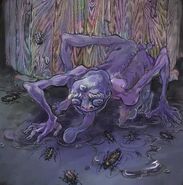 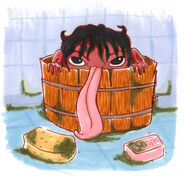