Abura-Sumashi (油すまし, Abura-Sumashi) is the ghost of a person who stole oil. Is found in Amakusa, Kumamoto prefecture.

The abura sumashi is a rare yokai native to Kumamoto. It looks like a squat humanoid with a large ugly head like a potato or a stone, wearing a straw-woven raincoat. It is extremely rare, only found deep in the mountains or along mountain passes in the southern parts of Japan – throughout the range where wild tea plants grow.

Very little is known about the lifestyle and habits of this reclusive yokai. The most well-known abura sumashi lives in the Kusazumigoe Pass in Kumamoto, but only ever appears briefly to travelers. Occasionally, an old grandmother walking the pass with her grandchildren will say, “You know, a long time ago, an abura sumashi used to live in these parts.” And occasionally a mysterious voice will call out in reply, “I still do!” Sometimes the abura sumashi even appears to the travelers, materializing out of thin air.

The name abura sumashi means “oil presser,” and comes from the act of pressing oil out of the seeds of tea plants which grow in Kumamoto. Though its origins are a mystery, it is commonly believed that abura sumashi are the ghosts of oil thieves who escaped into the woods. Oil was a very difficult and expensive commodity to make, requiring a lot of time and hard work to extract it from tea seeds, and so its theft was a very serious crime. Those thieves who went unpunished in life were reincarnated as yokai – a sort of divine punishment for their sins.

In modern media the abura-sumashi is often depicted as, "a squat creature with a straw-coat covered body and a potato-like or stony head," an appearance inspired by the artwork of Shigeru Mizuki. 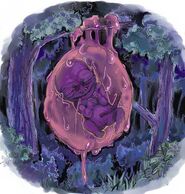