Ōmukade (大百足, Ōmukade) is a very large centipede-like yokai that lives in the mountains near Lake Biwa, Shiga Prefecture.

Ōmukade are monstrous mukade–centipedes (Scolopendra subspinipes) with dark bodies and bright orange legs and heads. They are often depicted with dragon-like features. While their non-monstrous cousins can grow up to 20 cm in length, the upper size limit on yōkai mukade is not known.

Like their smaller relatives, ōmukade are vicious and highly aggressive. The bite of a regular mukade is venomous and very painful, but rarely fatal. Ōmukade, on the other hand, are much more venomous and very strong. They have even been known to torment dragons.

An ōmukade’s exoskeleton is so tough that it can’t be pierced by weapons. They do have one weakness though: human saliva is toxic to them. A weapon coated in saliva may be able to pierce through its armor and wound it.

Ōmukade are extremely rare. When they are seen, they pose a threat to all in the area. Throughout history, the responsibility of exterminating these monsters has fallen on the shoulders of brave warriors.

There is a famous bridge in Shiga Prefecture known as Seta no Karahashi. Long ago, a great serpent appeared on the bridge and would not move. The villagers were too afraid to approach the serpent, and so they could not cross.

One day, the brave warrior Fujiwara no Hidesato came to the bridge. He was not afraid of the serpent, and he crossed the bridge, crunching its great body under his feet. The serpent slithered back into the lake, and the bridge was clear again.

That night, a beautiful woman visited Hidesato. She introduced herself as the daughter of the dragon king of Like Biwa. The dragon king had sent her to Hidesato to ask for his help. Her family was being tormented by an ōmukade who lived on Mount Mikami. She knew that Hidesato must be a brave warrior, because he had so fearlessly trampled her body. Hidesato agreed to help the dragon king. He took up his sword and his bow and headed to the mountains.

Upon reaching Mount Mikami, Hidesato saw an enormous centipede coiled around its top. Its was so long that its body wrapped around the mountain seven and a half times. He fired his arrows at it until only one arrow remained, but he was unable to pierce the beast’s armor. Hidesato coated the tip of the arrow in his saliva, and said a prayer to Hachiman, the god of warriors. This time his arrow struck true, and he brought down the ōmukade.

The dragon king’s daughter was so grateful to Fujiwara no Hidesato that she gave him marvelous gifts: a bag of rice which never became empty no matter how much rice was taken from it; a roll of silk which never ran out no matter how much was cut from it; a cooking pot which always produced the most delicious food without the need for fire; and a large temple bell, which Hidesato donated to Mii-dera. The grateful dragon king also told Hidesato the secret to defeating Taira no Masakado, the rebel whom Hidesato had been charged with bringing down. 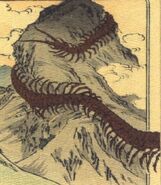 Ōmukade's size.
Add a photo to this gallery

Retrieved from "https://yokai.fandom.com/wiki/Ōmukade?oldid=10382"
Community content is available under CC-BY-SA unless otherwise noted.